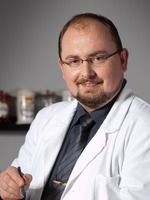 He born on April 3, 1972 in Žďár nad Sázavou, he grew up in the Highlands during his childhood, and in 1980 in South Moravia in the wine-growing village of Hlohovec. He graduated from grammar school in 1990 in Břeclav. He then joined the Faculty of Pharmacy at Charles University in Hradec Králové. Since 1991, he has been President of the Czech Pharmacy Students Association. Graduation in 1995, Master of Pharmacy. Subsequently, he joined the U Martina Polyclinic Pharmacy in Prague 10. After 3 years he became independent and started his business in the installation and training of Pentenium, later Farmis. In 1999, he and his wife in Říčany opened a private pharmacy called the White Lion, which continues the family tradition. Since 2002, he has been the dominant co-owner and director and CEO of SoPHIS a.s., which until 2009 specialized in the supply of software for pharmaceuticals, complement management and digitization of medical documentation in hospitals. Since 2009, she has been fully involved in the operation and work of the White Lion pharmacy in the family business, whose history continues the 7-generation continuous tradition of pharmacists of the Ullman-Pokorný-Bartková-Nedopil´s family. Currently a member of the Association for the Construction of the Czech Pharmaceutical Museum, a member of the ČFS (Czech Pharmaceutical Asociation) , the founding chairman of the association Vaši Lékárníci CZ z.s. (Your Pharmacists CZ ).

We use cookies to enable the proper functioning and security of our website, and to offer you the best possible user experience.